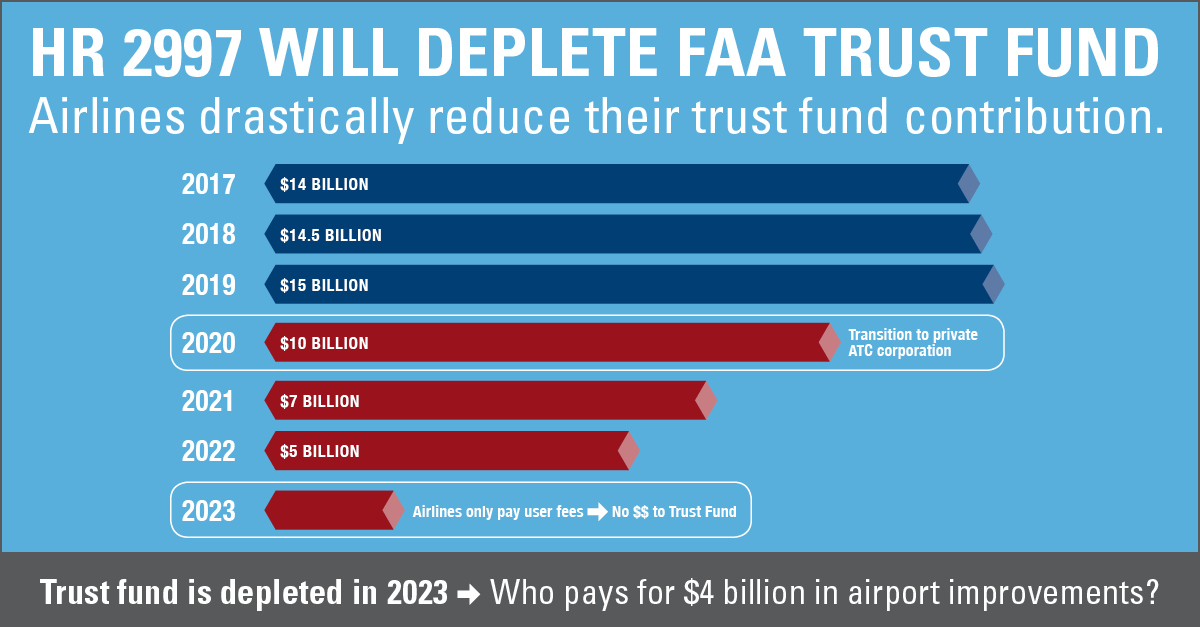 The Rules Committee Print for H.R. 2997, the 21st Century Aviation Innovation, Reform and Reauthorization (AIRR) Act, was released with pro forma Ways and Means Committee provisions to include a tax title and other significant modifications to the bill, as reported out of the House Transportation and Infrastructure Committee.

The National Association of State Aviation Officials (NASAO) opposes H.R. 2997 and firmly believes that ATC privatization poses many unnecessary, controversial risks and uncertainties that jeopardize the future of our national aviation system. While we have had multiple concerns since the proposal was first introduced, we have largely reserved final judgment in anticipation of the entire bill, complete with financing specifics.

The tax title rebalances revenue away from the Airport and Airway Trust Fund (AATF) with roughly estimated across-the-board tax cuts that increase reliance on the general fund. Between FY2012 and FY2016, the trust fund provided between 71% and 93% of the Federal Aviation Administration’s (FAA) total appropriations, with the remainder coming from the general fund of the U.S. Treasury. The AATF is healthy and almost completely sustainable in covering both operating and capital costs, including the Airport Improvement Program (AIP), for the FAA.

“This provision completely dismantles a system of taxes that is nearly self-sufficient in favor of a haphazard tax scheme that cannot even support the authorized AIP increases contained in the bill reported out of Committee,” said NASAO President, Mark Kimberling. “We anticipated the tax title could be problematic and have repeatedly stated this as a primary concern.”

Airports in the United States have nearly $100 billion in infrastructure needs over the next five years through 2021. This amounts to more than twice the total funding that airports currently receive through their annual net income, federal AIP grants and revenue from passenger facility charges.

“Focusing finite resources on building additional runways, upgrading airports and continuing progress on NextGen implementation will do more to markedly reduce congestion than even the best-case scenarios in terms of speculative benefits of this reform,” said Kimberling.

“These incremental AIP increases passed in Committee are long overdue and, yet, still will not be sufficient to meet the capital needs of our airports. Simply put, the opportunity cost of overhauling our ATC system is too high to justify.” 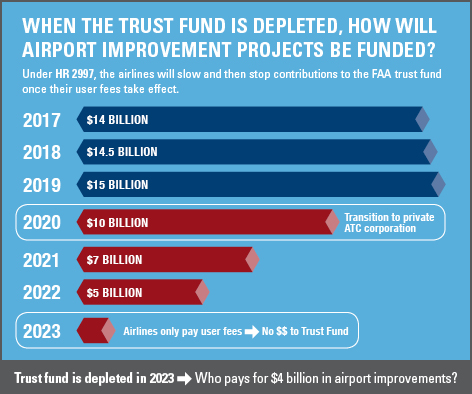